Two small bikes in the head

Namastey!
As a beginning, here is the path as it is supposed to be…. No doubt it will be different…

To find out how this map is constructed, it is here.

Nath’ as seen by JerM’ 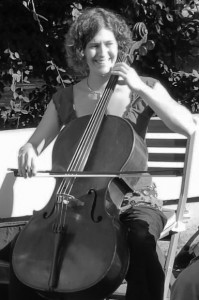 Nathalie loves: eating, sleeping, her bit of chocolate after dinner, having lazy morning, bitching, taking a nap… and it is always in a good mood after eating (ah I already said).

As you can see, Nathalie was born for the goodwill trip by bike 😉

Life devourer, in love with dance, traditional music and cello, converted
acrobat, lover of water sports and mountain… for her, the family, friends and
quality moments are sacred. With patience and exceptional listening, she sees
things in the long term. With her, it’s solid, things built with large stone,
not on sand. A practical dreamer, the best! Feet on the ground and head in the
stars…

But Nath is first and foremost my friend, my half, my confident and an
extraordinary woman with whom I want to share that dream!

Her role in the adventure: giving a return date, putting water on my Hothead,
allowing us to be invited in people’s house, obliging us to make breaks, telling
me that I’m rolling too quickly, pretending to pull the tongue while going
uphill, managing stock of tea, preparing hot-water bottles, watching if I have
lice in the beard, sleeping in the morning to let me draw, wondering about her
future job of psychomotor therapist and being convinced that 6 months of
travel… are not holidays!

JerM’ as seen by Nath’ 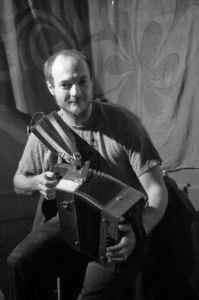 Jeremie is THE natural born happiness. Cheerful
and generous, he doesn’t need Facebook to have a sprawling social
network. Creating event from 1 to 300 people, he finds his balance as much in
the exclusivity of an intimate relationship as in a great orator role. His
insatiable creativity gives him a little crazy and in the clouds look. But be
careful if you cross his excel file! His rigorous and meticulous brain is
classing inside it all his ideas, desires, most varied and wacky projects in
order for everything to fit in a freely measured schedule!

In love with nature and fields as far as the eye can see, he is also a talented,
creator when, sit on a chair with a brush and a scalpel between the fingers, he
gives life to small fantasy figures for yet crazier collectors than him. It
seems that it is his job.

His hobbies? The diatonic accordion, folk/traditional balls, ballads, roller,
fighting people (ha calls this Kung-Fu…), spending evenings with friends,
travels… Its enhanced bicycle (the biclown) has already led him to the
discovery of the African continent for 22 months. He likes the endless debate,
rotten jokes and he likes me to have a as hairy as his beard body.

As you can see, Jeremie is this little imp always hidden in a corner of my head,
the one with who I’ll share every second of this trip and most importantly, the
one that will push me in the uphill. His role in this trip: giving Me wings when
I’m afraid to take some pretty bad hits along the way, making me believe that
we’re almost there, repairing my wheels, playing the artist so I could take my
nap… His head is already gone away while his legs are still in France. Brain
of organization, Inventory Manager, launcher of posts by passenger pigeon,
planning and anticipating are his key words and will allow us to truly enjoy
meetings on-site.

Everything starts with a small tour of 500 km in 2013, in France, as a matter of
overheating… to visit our country. A month in the French countryside
convinced us that the bike is cool, the contact with nature pleased us, the
climbs are terrible, the rain is boring, and that fresh air gives us a good
face.

Alright, one year later, we are on the road again.

More and more, our bikes seethe in the stable. We feel the call of the road.
the will to cross through landscapes at high speed, pedals on the ground,
becomes unbearable. We dream of sparks under the wheels, wild outing through
mountains, forests, countryside, deserts… We release the apartment, put our
comfort in boxes, and go on our bikes with our new house inside, and have our
sights on… India!

Between July 2014 and January 2015, we will discover this country-continent that we do not know on our without motors bikes.

From Leh, just to the North in the foothills of the Himalayas, until Cap Indira, the southern tip of Kerala.

The passes of Ladakh, temples Sikhs of Punjab, the dunes of Rajasthan,
Kutch desert, the crowd of Bombay, the beaches of Gao,
the ruins of Hampi, plantations of Karnataka, Kerala
channels… and Indians in the Middle. Lots. More than you can even
imagine, as it seems!

Here is our itinerary, assumed about 6000 Km, hoping it to be jostled by
encounters, discoveries, surprises… We will go there where the mild seasons
wants to greet us. The thirst for discovery will be our rudder (it’s
beautiful eh?)

India, a country-continent, a destination that seems to us to be self-sufficient.

Not having the impression to browse only a part of a journey that could be
greater, as it would be if going only to the Southern Latin America, and stop in
the Middle for example…

Curiosity about a way of life, go to a place unknown for our experience and our
memory to have a new look, find a route that can be followed by six months of
cycling, and where geographical, Visual, cultural variety…, seems to be able
to give grain to grind to our thirst of discovery, and the variety to brushes.

Colorful Turbans, mystical temples , tumultuous Ganges, food saturated with
spices, ceremonial ceremonies, sacred cows,
palpable spirituality, becoming aces of tea tasting… Cliché will
probably be justified, but with their mere mention, the desire to make our bag
to ‘go and see’, while being aware that there is no need to go to the other end
of the world and so far, to make thousands of kilometers for an emotion in front
of someone, to travel.

Then we wanted to go.

PENS, PAINTBRUSHES, CAMERAS ARE OUR COMPANIONS

On our bikes, bags.

In the bags: drawing paper, an on-board camera, a notepad, ears, eyes, and
everything you need to discover this country in roaming mode.

We wanted to bring back from this travel some matter to feel.

Making a trip and sharing it, is some kind of risk to lose our curious gaze, in
favor of the need to report at any price exotic images. We do not seek to say us
« I do absolutely do landscapes, sketches of people encountered… ». Everything
is done naturally.

We won’t acquire thousands of photos who will even not be viewed or falsely
shared. For us, the sketchbook remains the best way to take the temperature, to
accumulate without shame images, take time to observe.

You don’t talk to someone the same way with a notebook in hand than hidden
behind a camera.

The first voyage in unknown
country is scary. But the urge is strong and we begin gradually
the difficult path of learning self-control. Buddhist principle, great!

We tries to control our negative emotions to tame the wild
animal lurking inside us.

Therefore, we prepare our trip to channel this fear. A little too much, surely,
because we internally know that it will compose itself on the spot and improvise
itself a lot.

We will wander about with our own savings, as many hazelnuts put aside during
our years of work (and the help of our parents ;).

We have established a kind of route based on
the uses of Earth and men: summers in altitude to avoid heat and monsoon, if
possible winters along the coast and near the tropics, studying the seasonally
prevailing winds to avoid having them in front of our face…

Our journey cannot be planned precisely.

The randomness of encounters, weather conditions and the will of Vishnu, Krishna
and Ganesh should bring us some good surprises 🙂

Sometimes we’re looking for noble motivations to
travel. Should our journey be useful for something? Should we recognize the
usefulness of his journey?

Then we widen. We seek for hours a reason, develop ‘green nickname’ red wires
that rhyme with ‘sustainable development’ or ‘global warming’.

In short, we spend a lot of energy for nothing.

This cycling trip is not a sporting challenge. We have no good cause to defend,
no humanitarian association that could help, nor ambition to beat a record.

6 000 km, it is an arbitrary quantity, linked to a system of
measurement among others.

We have no pride to resist physical suffering because we stop when we are
tired. Rather not glorious to face the risks of high mountains because it is
guided by the poetry of landscapes.

The legs and head are working together so that the bike and its rider
rise.

Halalalala, the sweet scent of adventure, noise of wind in the rays, noise of
the hiss of punctures…

In fact, what is sought, that’s precisely what prompted us to leave!

THE BIKE, AN INCENTIVE HAS THE FUGUE

The small Queen seems simply one of the more
pragmatic way to travel as slowly as the hearts of the people.

We are committed to the contact with the soil, the Earth and its inhabitants.

Praise to those who have done so, but we fear to suffer heavy damage in our
shoulders and knees too.

There is also a satisfaction to cross country to the strength of the calves. The
unbroken red line of our route takes shape on the map. Map that is carefully
folded and that we retain for future reference. We do not want to « be
transported » by making « smart breaks » from point A to point B, reached by bus,
train or car. Moreover, we are not born engineers. Change an air Chamber and
tighten brake cables are real learning for us!

And above all, it is ultra cheap. Maintenance and replacement of parts included,
Jeremie’s bike traveled along 30000km for only EUR 2000. That’s about 0.06
euro/km.

WHICH PREJUDICES BEFORE LEAVING?

From tradition or in the air, often mixing true
and false, received ideas are all the heads. As some have asked us them, here
are ours!

The author takes them for starting point and brings here a distanced and
in-depth light on what is known, or believed to be known.

Having not enough space in our saddlebags, it is
through this site that you will travel on our side…

What is the point in traveling if we don’t share it?

Jeremie’s first bicycle journey was motivated by other travelers who have shared
their experiences and demystified the « long term journey ».

After two years in Africa and 22 countries crossed, it’s been Jeremie’s turn to
receive many positive comments from people who have escaped through him and who
sometimes have themselves flown away…

Then this blog is intended to tell stories, trips, and all in pictures. There’s
no rules, or guidelines but rather themes and series that will follow all the
months according to our moods and our desires.

Do not see here the work of journalists, or the research of an ethnologist, or a
travel guide. This site is nothing else than the spontaneous expression of
personal experience. Day after day, notebooks fill with impressions, leaves with
anecdotes, paper drawing of sketches and watercolours on the spot. Simple
testimony of two persons on Indian Earth, communicating in a language that is
not their mother tongue, with the stranger’s eyes.

We wish you as much fun to browse the India through this site, to discover its
people and its geography, as we will have during this journey.

Take a seat on our bike, we take you on a trip! 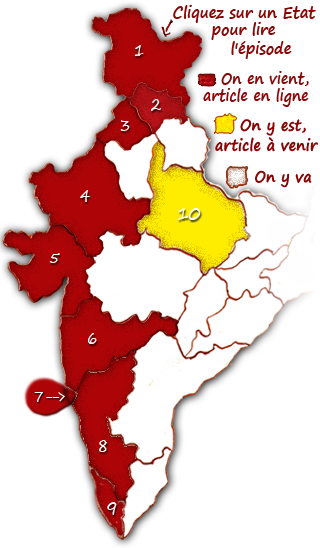